Replay Available: Science and Technology Caught Between the United States and China

Replay Available: Science and Technology Caught Between the United States and China

On June 27, 2020, the Chinese American Biopharmaceutical Society (CABS) successfully hosted a webinar entitled “Science and Technology Caught Between the United States and China”. Brian Sun from law firm Jones Day presented the talk. This webinar attracted more than 500 attendees from around the world

Reply of of the webinar can be accessed here 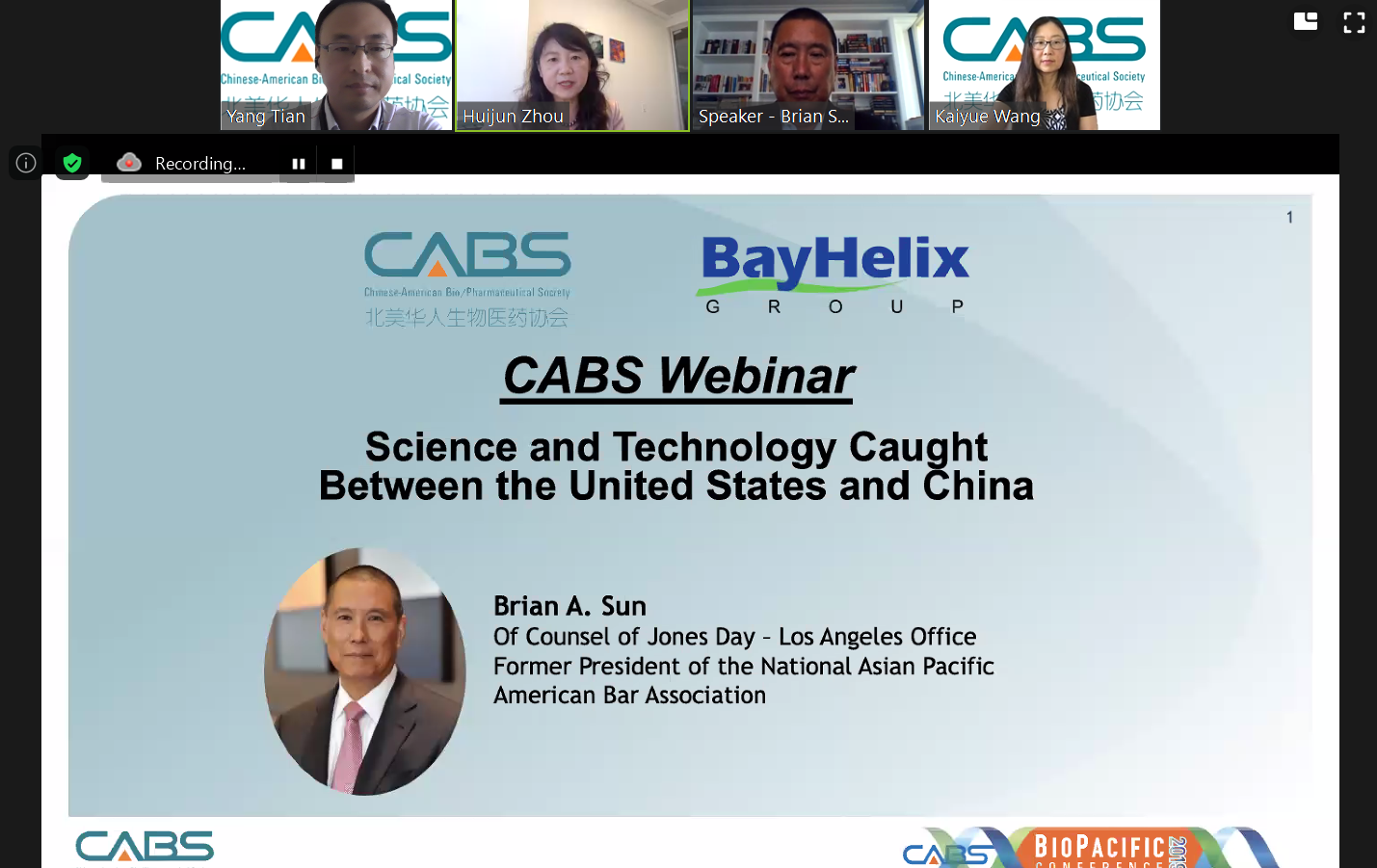 Brian Sun is former president of the National Asian Pacific American Bar Association (NAPABA) and Of Counsel of law firm Jones Day in Los Angeles office. In 2013 he was honored by NAPABA with its Trailblazer Award and by the Southern California Chinese Lawyers Association with its Lifetime Achievement Award. He also served as a deputy general counsel to the Christopher Commission, which recommended sweeping reforms of the Los Angeles Police Department in the wake of the Rodney King incident. He represented Dr Wen Ho Lee in his successful civil lawsuit against the US government.

Brian Sun has earned a national reputation as a distinguished trial lawyer in complex business litigation and white collar criminal defense. He is a former federal prosecutor, a Fellow of the American College of Trial Lawyers, and has been named by Lawdragon Magazine as one of America's 500 leading lawyers. Brian is recognized as a Band 1 lawyer by Chambers and listed among the most highly regarded lawyers in the U.S. by Who's Who Legal in the area of business crime defense. 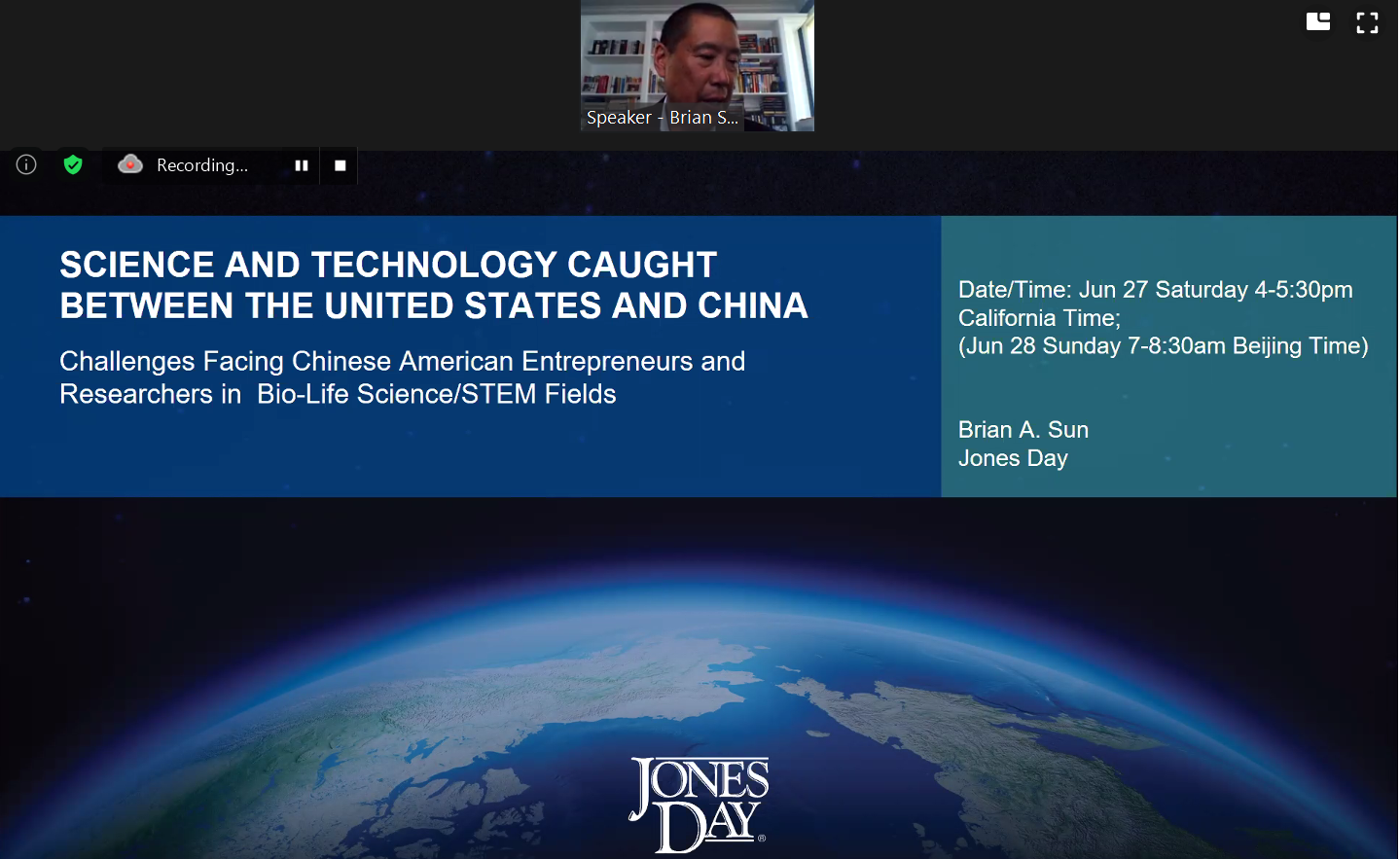 In the presentation, Brian started with a historical review on the bias on Chinese-American and current new era of U.S.-China Relations and Challenges for Chinese-American STEM Professionals. Then Brian talked about three racial profiling cases, and how those cases promoted Chinese-Americans to fight for their rights since 1980s. Brian followed his talk with a few recent cases against Chinese-American STEM professionals working at US academic institutes and private companies. In the end Brian gave some practical advices on how to navigate career opportunities and avoiding pitfalls in the 21st Century of U.S.-China relations, including U.S. criminal statues and defenses, and best practices for companies and institutions. “All Chinese-Americans need to get organized, get their acts together, work together and speaker up, to protect our future generation, to improve ourselves, and to improve our country”, Brian concluded this talk.

After the presentation, Brian answered questions from audience.

We would like to thank Brian Sun for his time and efforts for this webinar. We also want to thank Tony Chen and BayHelix for co-organizing this webinar; thanks to Huijun Zhou, Yang Tian, Hesong Han, Jenen Tan, Guanghui Han, and Carrie Wang, for organizing the logistics of the event. To learn more about CABS’ events and its effort in the COVID-19 response, please visit our website www.cabsweb.org. A replay of the webinar recording will be available on this site.